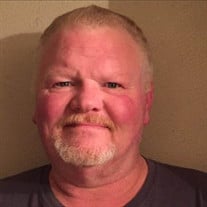 James A. “JR” Stremmel, 55, of Abingdon, passed away on Thursday, January 13, 2022, 6:11 PM at OSF St. Mary’s Medical Center, Galesburg. JR was born on July 31, 1966 in Galesburg. He was the son of James A. and Janice (Burke) Stemmel, Sr. JR is survived by the love of his life, Robin McCracken of Abingdon; his best friend and son, Tyler Stremmel of Abingdon; mother, Janice Stremmel of East Galesburg; sisters, Jamie (Chuck) Allen, Jr. of Abingdon and Julie Falls of East Galesburg; three nieces, Ashley Stremmel, Chelsea Sanko and Miranda Falls; two nephews, Kyle Allen and Tim Allen; uncle, Norman Stremmel of Galesburg; a granddaughter, Izzy; two great nephews, Ayden and Liam; and his four legged friends, Lil Bit, Missy and Bella. He was preceded in death by his father and a brother-in-law, Vaughn Falls. JR was a 1985 graduate of Knoxville High School. He was owner and operator Jim’s Work Force for 15 years. JR was saved at and became a member of the East Galesburg Community Chapel. He served as Vice President of the Knox County Triad, coach for the Special Olympics, athletic director for the Knox County Knights and a member of the Pacific Lodge #66 A.F & A.M. JR loved to cook, fish, and go camping with his family and friends. He always looked forward to the fishing trips to Wisconsin with his dad. JR was a devoted family man, especially Robin and Tyler. Tyler was JR’s world the two were always together, whether it be at Tyler’s favorite restaurant La Roma’s or out in the community working or attending various events. JR will be greatly missed by those who loved him. Visitation will be held from 10:00 AM to Noon, on Friday, January 21, 2022, with a funeral service to follow at 12:00 PM at the Hurd-Hendricks Funeral Homes & Crematory in Knoxville, Illinois. Cremation rites will be accorded after services. Rev. Danny England will officiate. Hurd-Hendricks Funeral Homes and Crematory, Knoxville have been entrusted with arrangements. Memorials may be made to the East Galesburg Chapel. On-line condolences and/or expressions of sympathy may be sent through www.hurd-hendricksfuneralhome.com.

The family of James A. Stremmel Jr. created this Life Tributes page to make it easy to share your memories.

Send flowers to the Stremmel family.