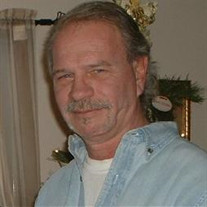 James E. Roberson, age 65, of Knoxville, Illinois, passed away on October 16, 2019 at the Saint Francis Medical Center in Peoria, Illinois. He was born on May 17, 1954 in St. Louis, Missouri, the son of Lois Bradford of Knoxville, Illinois, and Ross C. Roberson, Sr. of New Port Richey, Florida. He was preceded in death by his mother, Lois Bradford and stepfather, James Bradford. He leaves one son, Joshua Roberson of Knoxville, Illinois; two brothers: Ross (and Sharon) Roberson, Jr. of Pasadena Texas, Michael Roberson of Tulsa Oklahoma; and one sister, Cathy (and Dan) Way of Fort Walton Beach, Florida. James attended Knoxville Senior High School, graduating in 1972. He was employed by Gates Rubber Co. in Galesburg, Illinois, then Caterpillar in Peoria, Illinois, where he retired from. His greatest passion was riding and working on his Harley Motorcycle. He had a heart of gold and lived life to the fullest. He will be missed but will live on in our hearts forever. Cremation rites have been accorded. Graveside memorial services will be held on Thursday, November 21, 2019 at 2:00 P.M. at the Knoxville Cemetery. Hurd-Hendricks Funeral Home & Crematory in Knoxville is assisting the family. Memorial contributions may be made to the family.

The family of James E. Roberson created this Life Tributes page to make it easy to share your memories.

Send flowers to the Roberson family.