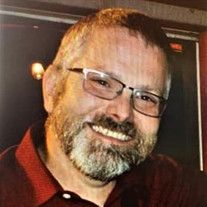 James Douglas Nelson, age 47, of Oneida, Illinois, passed away at 6:09 P.M. on Thursday, November 28, 2019 at the OSF Saint Francis Medical Center in Peoria, Illinois, surrounded by his loved ones. In keeping with James’ loving and generous spirit, it was his decision to donate life so that others may live. He was known as a giving person and even in death, his giving continues as he gave the gift of life through tissue donation. He was born on January 3, 1972 in Galesburg, Illinois, the son of Jerry H. and Susan Nelson. He grew up in Altona and attended ROWVA high school. James served his country in the National Guard and was a proud veteran and a true patriot who loved his country deeply. Left to cherish his memory is his son, Tyler James (and Kellea) Nelson of Eureka, Illinois; his mother, Susan Nelson of Galesburg; his two brothers: Jason (and Dana) Nelson of Delong, Illinois, Jonathan (and Tammy) Nelson of Victoria, Illinois; nieces and nephews: Briar and Baylor Nelson of Victoria, Kinley Nelson of Delong; his special friend, Stephanie Hall of Galesburg; and his grandmothers, aunts, uncles, and other extended family. He was preceded in death by his father, Jerry H. Nelson. James worked for many years at the Gates Rubber Company. He was an avid outdoorsman and a passionate bowhunter, especially of white tail deer. He was an active and dedicated member of the Little John Conservation Club, the Galesburg Archery Club, and the NRA. He also served as Post Commander of the Ekstedt-Hurr American Legion Post #390 of Altona. James was also active in the Honor Flight Network and Shave for the Brave. He loved his country and his family more than anything. James was a loving father, son, brother, uncle, grandson, and friend and he will be missed greatly by all who knew him. Cremation rites will be accorded. Visitation will be held on Wednesday, December 4, 2019 from 5:00 P.M. to 8:00 P.M. at the Hurd-Hendricks Funeral Home in Oneida, Illinois. The memorial service will be held on Thursday, December 5, 2019 at 10:30 A.M. at the funeral home, Rev. Tim Anderson officiating. Military rites will be conducted by the Ekstedt-Hurr American Legion Post #390 of Altona. Inurnment will take place at the Altona Cemetery in Altona, Illinois. Memorial contributions may be made to the Honor Flight of the Quad Cities.

James Douglas Nelson, age 47, of Oneida, Illinois, passed away at 6:09 P.M. on Thursday, November 28, 2019 at the OSF Saint Francis Medical Center in Peoria, Illinois, surrounded by his loved ones. In keeping with James&#8217; loving and generous... View Obituary & Service Information

The family of James D. Nelson created this Life Tributes page to make it easy to share your memories.