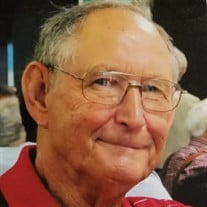 James M. “Jim” Moore, of Knoxville, Illinois, a kind man with a good heart, enjoyed life from September 8, 1932 until April 1, 2020. He was 87 years old. Jim was born in Richland Grove Township, Illinois, the son of Ray and Edna (Pierce) Moore. He grew up in the Viola area, making many wonderful memories and lifelong friends. He graduated with the class of 1950 from Viola High School. On December 2, 1950, Jim married the love of his life, WillaDeane “Deanna” Jenkins at the Saint John’s Catholic Church in Viola. They were married for 69 years. She survives; along with their daughter, Paula (Jim) Knox, and one much adored grandson, Jeffrey (R. Wade Ewalt) Knox. He was preceded in death by his parents; his beloved son, James M. Moore, Jr.; five brothers; and one sister. Jim proudly served his country in the United States Army during the Korean War. A hard-working man, he loved to work the land and in his early life was a farm hand for several farmers. Later he built Harvestor silos and worked as a mechanic. He retired from Emstrom Trucking in Galesburg. In his retirement, he enjoyed working on the farm alongside Justin Moffitt and as a bus driver and bus aide for Knoxville District 202. He was a member of the Corpus Christi Catholic Church in Galesburg and also attended the Immaculate Heart of Mary Catholic Church in Galesburg. He was a proud member of the Knoxville American Legion. Jim never met a stranger and enjoyed visiting with people. As his family will tell you, he was also extremely competitive. Family reunion volleyball games were intense as were late-night games of Carroms and afternoons of croquet. Jim loved sports, especially football. The family would like to thank Courtyard Estates of Knoxville, Seminary Manor, and Hospice Compassus for the care and support given to Jim. Private graveside services will be held at the Knoxville Cemetery. A Celebration of Life will be held at a later date. Memorial contributions may be made in Jim’s memory to the Greater Peoria Honor Flight and the Knoxville Fire Department First Responders.

The family of James M. "Jim" Moore created this Life Tributes page to make it easy to share your memories.