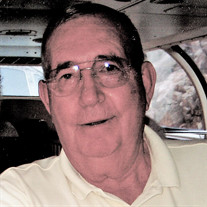 Jack L. Moore, age 86, of Williamsfield, Illinois, died at 6:11 A.M. on Wednesday, July 10, 2019 at Seminary Manor in Galesburg, Illinois. He was born on August 31, 1932 at the foot of Tucker Hill in Dahinda, Illinois, the son of Darwin F. and Gwendolyn (Walters) Moore. He was reared and educated in the Williamsfield area, graduating from Williamsfield High School in 1950. After graduation, Jack enlisted in the United States Navy, proudly serving his country on the USS Franklin D. Roosevelt Aircraft Carrier from 1952 to 1956. On December 24, 1992, Jack was married to Karen E. Davies-Johnson in Abingdon, Illinois. Jack is survived by his loving wife, Karen E. Moore of Williamsfield; three children: Leslie Lowney of Waverly, Nebraska, Stephanie (and Scott) Barnwell of Spring Hill, Florida, Scott (and Amy) Moore of Indiana; three step-children: Brian (and Julie) Johnson of Gilson, Illinois, Annette (and Tony) Schmitt of Houston, Texas, Joe (and Kathy) Johnson of Dahinda; six grandchildren; two great-grandchildren; one sister, Ruth Ann (and Bill) Herman of Williamsfield; and many special cousins, nieces, and nephews. He was preceded in death by his parents; one son, Jeffrey Moore; one son-in-law, Bernard Lowney; and two brothers: Darwin Moore and James “Buzz” Moore. Jack worked for a majority of his life as a farmer, and was also the Gilson Post Master for thirty-three years. He was a devoted member of the Williamsfield United Methodist Church, Williamsfield American Legion, Western Illinois Antique Auto Club, and the Union 4-H Club. Jack also served on the Knoxville School Board and was past president of the Gilson PTA. He will be remembered for his love of nature and the outdoors; he was an avid hunter and fisherman. Jack also greatly enjoyed working with horses, as well as playing cards, traveling, and any and all sports. Visitation will be held on Sunday, July 14, 2019 from 5:00 P.M. to 7:00 P.M. at the Hurd-Hendricks Funeral Home & Crematory in Knoxville, Illinois. The graveside funeral service will be held on Monday, July 15, 2019 at 11:00 A.M. at the Williamsfield Cemetery in Williamsfield, Illinois. Military rites will be conducted by the Williamsfield American Legion Post #371. Memorial contributions may be made to the Saint Jude Children’s Research Hospital or the Williamsfield United Methodist Church.

The family of Jack L. Moore created this Life Tributes page to make it easy to share your memories.