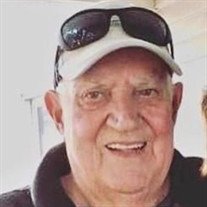 Jack L. Gladfelter of Knoxville, Illinois died on January 17, 2022 at 4:30 P.M. at Bayfront Health in Brooksville, Florida. Jack was born on June 5, 1936 at home in Victoria Twp., Illinois the son of Lyle and Mildred (Kenney) Gladfelter. He attended and graduated from Knoxville High School in 1955. He married Joan Schulz on August 19, 1956 at the United Methodist Church in Knoxville, Illinois. She preceded him in death on September 14, 2019 at 63 years of Marriage. Surviving is his daughter: Debbie (Thomas) Worden of Knoxville, Illinois; Three granddaughters: Michelle (Nolan) McBride of Knoxville, Illinois, Megan (Travis Fohey) Moore of St. Louis, Missouri, and Hailey (Tyler German) Worden of Knoxville, Illinois; five great grandchildren: Makaiha Moore, Jordy McBride, Kasen McBride, Oaklyn McBride, Roman Fohey and one the way, and a good friend, Debbie Wood. He was preceded in death by his parents, wife, son Stephen Gladfelter and four sisters. He worked as a mechanic, managed a couple of gas stations in the area, the former Gale products, and owned and operated Jack’s Alignment and Brake Service in Knoxville, Illinois for over 35 years, retiring in the mid 1990’s. He also drove a bus for Knoxville Community School District 202 for many years. He was a life member of the NRA, member of the Knoxville Business Association, on the Board of Directors for the Knoxville Little League, and helped coach the girls’ softball team. He was very active in the community. A celebration of life will be held from 1:00 PM to 3:00 PM on Saturday, February 5, 2022 at Big Catz BBQ in Knoxville, Illinois. Memorial contributions may be made to St. Jude Children’s Hospital. Hurd-Hendricks Funeral Homes & Crematory will be assisting the family with their services. On-line condolences and/or expressions of sympathy may be sent through www.hurd-hendricksfuneralhome.com

Jack L. Gladfelter of Knoxville, Illinois died on January 17, 2022 at 4:30 P.M. at Bayfront Health in Brooksville, Florida. Jack was born on June 5, 1936 at home in Victoria Twp., Illinois the son of Lyle and Mildred (Kenney) Gladfelter. He... View Obituary & Service Information

The family of Jack L. Gladfelter created this Life Tributes page to make it easy to share your memories.

Send flowers to the Gladfelter family.