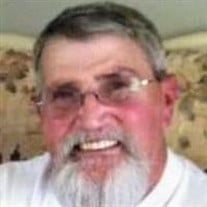 Jack E. Fisher, Jr., 66, of Knoxville, Illinois passed away Friday, March 22, 2019 at 9:05 A.M. at the St. Mary Medical Center in Galesburg, Illinois with family by his side. Jack was born September 15, 1952 at Eglin Air Force Base, Florida, the son of Jack and Dee (Brokaw) Fisher. He graduated from Knoxville High School with the class of 1970. He then proudly served his country as a member of the United States Army from 1970 to 1972. Jack married Kathy Grabill on September 19, 1980 in Galesburg. Jack was a Journeyman Roofer for Dowers Roofing for 25 years. He was a member of the Local 32 Roofers Union for 41 years. In recent years he enjoyed watching Westerns, playing computer games, and spending time with his family and friends. Jack will be remembered as a true “Mr. Fix It” and as a kind and gentle man to everyone he met, including animals. He was a true lover of animals. He is survived by his wife, Kathy Fisher of Knoxville; his “Special Hun” Chloe Wilson Jones; and her daughter, his great-great niece, Mia Bibbs; mother, Dee Fisher of Knoxville; brother, David (Jill) Fisher of Rio Community, New Mexico; mother-in-law, Alene Herren of Knoxville; 3 sisters-in-law, Sharon (Bob) Scanlon of Lakewood Ranch, Florida, Toni Springer of Saint Petersburg, Florida, Terrie (Kevin) Lange of Mesa, Arizona; 9 nieces; 9 great-nieces; 3 great-nephews; as well a many aunts, uncles, and cousins. Jack was preceded in death by his father, Jack, Sr.; father-in-law, Anton Grabill; his grandparents; 2 great-nephews; and a great-niece. A celebration of life service will be held Saturday, April 6, 2019 from 2:00 P.M. to 6:00 P.M. at the Knoxville American Legion. Memorial contributions can be left to the St. Jude Children’s Research Hospital or to the family. The Hurd-Hendricks Funeral Home in Knoxville is assisting the family with arrangements.

The family of Jack E. Fisher, Jr created this Life Tributes page to make it easy to share your memories.

Send flowers to the Fisher, family.