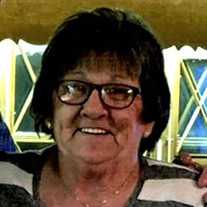 J. “Sandy” Watters, age 76, of Galesburg, Illinois, passed away peacefully at 10:25 A.M. on Thursday, October 31, 2019 at her home, surrounded by her loved ones. She was born on February 12, 1943 in Sikeston, Missouri, the daughter of Louis L. and Irene (Krall) Friend, Sr. She grew up in the Galesburg area and attended Wataga High School in Wataga, Illinois. In 1960, Sandy was married to Charles “Gene” Dollinger in Galesburg; together they raised three daughters. She later married Ernest Watters in 1986 in Galesburg; Ernest preceded Sandy in death on April 2, 1992. Left to cherish Sandy’s memory are her three loving daughters: Joyce (and Mike) Hasselbacher of Galesburg, Brenda (and Rick) Austin of Wataga, Kelly (and Carey) Shawgo of Galesburg; two step-children; five grandchildren: Krista Line, Rusty Line, Becca Schurman, Justin Shawgo, Jesse Line; five great-grandchildren; six siblings: Les (and Helen) Friend, Karen (and Les) Baker, Ronnie (and Linda) Friend, Nina (and Stephen) Smith, Debbie (and Dave) Marty, Monica (and Robert) Inness; one uncle, Johnny (and Stella) Friend; one aunt, Chris Bryan; many nieces and nephews; lifelong friends: Rosie (and Randy) Hurst, Connie Friend; and her beloved dogs: Lucky and Wrigley. She was preceded in death by her parents; husband, Ernest Watters; brother, Louis Friend, Jr; and nephew, Todd Friend. Sandy worked for over thirty years at Maytag as a laborer, retiring in 1996. She was a dedicated member of her church, the Wataga Congregational Church. There were many past times that she enjoyed, including gardening, cross stitch, decorating, sewing, bowling, and playing darts in the league. She enjoyed watching baseball and rooting for her favorite team, the Chicago Cubs. More than anything, Sandy loved her family and spending time with them. She was a devoted and loving wife, mother, grandma, great-grandma, sister, aunt, and friend and she will be deeply missed by all who knew and loved her. Cremation rites will be accorded. Visitation will be held on Saturday, November 16, 2019 from 1:00 P.M. to 3:00 P.M. at the Hurd-Hendricks Funeral Home in Knoxville, Illinois. The memorial service will directly follow at 3:00 P.M. A private inurnment will take place at a later date at the Linwood Cemetery in Galesburg, Illinois. Memorial contributions may be made to the Knox County Humane Society.

The family of J. "Sandy" Watters created this Life Tributes page to make it easy to share your memories.

Send flowers to the Watters family.