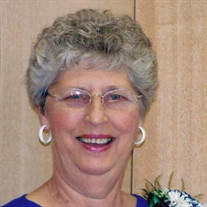 Ina Ilene (Lowry) McKie went home to our Lord on Monday, April 4; after a short stay at Knox County Nursing Home. Ina was born to Chester and Dolly (Garrett) Lowry on March 3, 1934 in Fort Scott, Kansas. She moved to Galesburg Illinois with her family and attended Galesburg schools and later received her GED in 1981 from the American School in Chicago. She married James Coon and together they had a son, Rodger (Gerry) L. Coon of Galesburg. She later married C. Eugene McKie on July 2, 1966. They celebrated 40 years of marriage before Eugene passed away on December 28, 2006. Surviving are her two step-daughters, Nancy Stone of Wataga and Linda (Gary) Giger of Moline. Also surviving are her grandchildren Jeremy (Kelli) Coon of Galesburg and Timothy (Akino) Coon of Okinawa, Japan; step-grandchildren Kevin (Christy) Stone of Wataga, Kelly (Brent) Hill of Oneida, Eric (Trisha) Giger of Edwards, Amanda (Ryan) Kelly of Colona, Scott (Emily) Giger of Brookfield, WI, Jennifer (Jeff) Sholl of Galesburg, and Brian (Julie) Thurman of Denham Spring, LA and several great- grandchildren; and her two brothers Marvin (Jeanne) Lowry of Minnesota, and Carl (Deb) Lowry of New York; two sister-in-law’s Sonny Lowry of Florida. And Susie (Gayle) Krantz of Oneida. She was preceded in death by her parents, husbands, one brother and two sisters. Early on she worked several years at Maytag and Gale Products. She went on to own and operate a restaurant in Oneida from 1961 to 1966. She retired in 1989, after twenty-two and a half years at the United Postal Service in Galesburg. She was a member of The United Presbyterian Church of Oneida, the Presbyterian Women’s Society, Oneida Women’s Club, and a thirty-six-year member of the American Legion Auxiliary. She enjoyed living at Seminary Estate with the fellowship of all of her friends. Her hobbies were gardening, cooking, baking, and being an excellent seamstress. Her laugh and lively attitude will be greatly missed by her friends and family. Memorial Service will be held at 11:00 A.M. on Saturday April 16, at The United Church of Oneida, with Rev. David Pyell officiating. Burial will follow the service at the Oneida Cemetery, followed by a fellowship at the Church. Hurd-Hendricks Funeral Homes and Crematory, Oneida have been entrusted with services. Memorials may be donated to, ROWVA Community Food Pantry, or The United Church of Oneida. On-line condolences and/or expressions of sympathy may be sent through www.hurd-hendricksfuneralhome.com

Ina Ilene (Lowry) McKie went home to our Lord on Monday, April 4; after a short stay at Knox County Nursing Home. Ina was born to Chester and Dolly (Garrett) Lowry on March 3, 1934 in Fort Scott, Kansas. She moved to Galesburg Illinois with... View Obituary & Service Information

The family of Ina IIlene (Lowry) McKie created this Life Tributes page to make it easy to share your memories.

Send flowers to the McKie family.