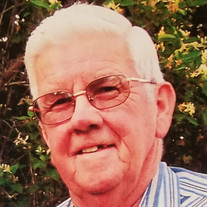 Irvin George Vollmar, age 79, of East Galesburg, Illinois died at 2:15 A.M. on Saturday, December 09, 2017 at Aperion Care in Galesburg, Illinois. George was born on May 31, 1938 in Canton, Illinois the son of Howard and Greta Worrell Vollmar. He was raised in the Fairview, Illinois area and graduated from Spoon River Valley High School in 1956. He then served in the Army during peacetime and the Army Reserves. He married Dianna Rae Alstedt on April 19, 1975 at the United Methodist Church in Maquon, Illinois. She preceded him in death on March 2, 2007. Surviving is his daughter: Julia (Rod) Murk of Edelstein, Illinois and his son Keith Vollmar of Valley Park, Missouri; four grandchildren: Wyatt Vollmar, Grant Vollmar, Amelia Murk and Daniel Murk; two sisters: Neva (Phil) Brown of Maquon, Illinois and Jalayne Vollmar of East Galesburg, Illinois; a brother, Kermit (Sharon) Vollmar of Fairview, Illinois. He was preceded in death by his Parents, wife, and one brother, Virgil. He was an Independent Truck Driver for over 40 years and farmed in the Knox County area for many years. He served on the Knox County Fiar Board for sixteen years and enjoyed his family and friends. Graveside Memorial Services will be held at 1:00 P.M. on Friday, December 15, 2017 at the Knoxville Cemetery in Knoxville, Illinois with Rev. Krey Leesman officiating. A Fellowship will follow the graveside services at the Hurd-Hendricks Fellowship Center in Knoxville, Illinois. Memorials contributions may be made to the Knox County Fair Grounds. On-line condolences or expressions of sympathy may be made through www.hurd-hendricksfuneralhomes.com

Irvin George Vollmar, age 79, of East Galesburg, Illinois died at 2:15 A.M. on Saturday, December 09, 2017 at Aperion Care in Galesburg, Illinois. George was born on May 31, 1938 in Canton, Illinois the son of Howard and Greta Worrell Vollmar.... View Obituary & Service Information

The family of I. George Vollmar created this Life Tributes page to make it easy to share your memories.

Send flowers to the Vollmar family.