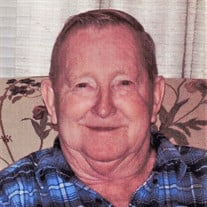 Herman M. Cordle, age 77, of Galesburg, Illinois, died at 3:38 P.M. on Saturday, January 26, 2019 at the OSF Saint Mary Medical Center in Galesburg. He was born on November 14, 1941 in Lunenburg, Virginia, the son of Claude H. and Margaret V. (Eubank) Cordle. He was reared and educated in Victoria, Virginia. On August 18, 1967, Herman was married to Judith A. Emerick at the First United Methodist Church in Galesburg, Illinois. Left to cherish his memory is his wife, Judith A. Cordle of Galesburg; their three sons: David E. (and Kim) Cordle of Galesburg, Michael W. (and Tiffany Humphrey) Cordle of Alexis, Illinois, and Steven E. Cordle of Galesburg; two step-sisters: Neomi Peterson of Galva, Illinois, Maxine Naslund of Saint Louis, Missouri; two sisters-in-law: Carolyn Cordle of Pekin, Illinois, Bonnie Cordle of Henderson, Illinois; and several nieces and nephews. He was preceded in death by his parents and four brothers: Harris Cordle, Jim Cordle, Freeman Cordle, and a brother who died in infancy. Herman first worked as a machinist for the Burlington Northern Santa Fe railroad before enlisting in the United States Army and proudly serving his country. After his service, he went back to work for BNSF. He later worked at the former OMC Gale Products until it closed. He then worked for AVCO Aero Structure in Nashville. Upon his return to Galesburg, he was employed at Midstate Manufacturing. He then later worked again for BNSF, until his retirement. Herman greatly enjoyed fishing, hunting, camping, and fixing cars. Visitation will be held on Saturday, February 2, 2019 from 2:00 P.M. to 4:00 P.M. at the Hurd-Hendricks Funeral Home & Crematory in Knoxville, Illinois. Graveside memorial services will be held on Saturday, June 1, 2019 at 10:00 A.M. at the East Linwood Cemetery in Galesburg. Memorial contributions may be made to the VFW Post #2257.

Herman M. Cordle, age 77, of Galesburg, Illinois, died at 3:38 P.M. on Saturday, January 26, 2019 at the OSF Saint Mary Medical Center in Galesburg. He was born on November 14, 1941 in Lunenburg, Virginia, the son of Claude H. and Margaret... View Obituary & Service Information

The family of Herman M. Cordle created this Life Tributes page to make it easy to share your memories.

Send flowers to the Cordle family.