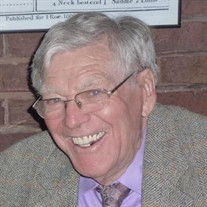 Harold Wadsworth Flinn, Jr., 96, of Elmwood passed peacefully at 4:30 A.M. Sunday, January 19, 2020 at Country Comfort Retirement Home in Elmwood. Harold was born on Dec 1, 1923 in Chicago, Illinois, the son of Harold W. Flinn, Sr., and Claire (Pfirfenschneider) Flinn. He graduated from Maine Township High School where he competed in the State Finals in Cross Country. After high school, Harold enrolled in a radio communications school where he was selected by and served in the United States Army 23rd Headquarters Special Troops (aka, Ghost Army) during World War II. During his military training, Harold met Ruth Ann Platt and they were joined in Holy Matrimony on May 16, 1944 in Park Ridge, Illinois. Harold was very proud of his role in WWII and kept true to the secrecy of the unit until its declassification in the 1990s. He always looked forward to the regiments many reunions. After the war, Harold and Ruthann lived in Chicago where he worked for Bell Telephone. In the late 1940s, Harold and Ruth Ann moved to rural Maquon where he found a new livelihood in agriculture. He was a member of Grace Anglican Church in Galesburg and served on the Church's Vestry and building committee. Harold was Commander of the Maquon American Legion, Chairman of the Maquon Homecoming, and served as Boy Scout Master to the Maquon community. He was a member of the Lincolnland Coachmen Camping Club, a Master Gardener, and alongside Ruth Ann, taught gardening classes and served as a Knox County 4H judge. Surviving are three sons, Douglas (Tamara) Flinn of Centerburg, Ohio, Harold Edward (Claire) Flinn of Bettendorf, Iowa, and Steven (Susan) Flinn of Elmwood; two daughters, Patricia (Charles) Brown of Galesburg, and Mary (Amo) Peterson of Naperville; 13 grandchildren; and 18 great-grandchildren. On September 14, 2017 he lost Ruth Ann. He was also preceded in death by his parents; his sister, Florence; and foster son, David Hendrickson of St. Louis, Missouri. Throughout his long life, Harold knew how to enjoy life. Whether it was gallivanting through the neighborhoods on the north side of Chicago and visiting Wrigley Field in the 1930s, to taking long cross-country camping vacations with his family, or being at the "lake" with the extended family on nearly every Sunday afternoon throughout the summer; Dad balanced work and play. Harold embraced new technology, education, and creativity. And once when a Ford or Chevy automobile would have been appropriate, dad purchased a Fiat convertible. Later in his life, Harold and Ruth Ann took up bicycling and despite being an amputee, they would often ride upwards of 30 miles. He and Ruth Ann lived by the Golden Rule and instilled the values of family, integrity, and faith in his children. Visitation will be held on Friday, January 24, 2020 from 4:00 P.M. to 7:00 P.M. at the Hurd-Hendricks Funeral Home & Crematory in Knoxville, Illinois. A graveside service will be held on Saturday, January 25, 2020 at 11:00 A.M. at the Maquon Cemetery in Maquon, Illinois, Rev. Fr. Andy Ainley officiating. Military rites will be conducted at the cemetery. Memorial contributions may be made to the Grace Anglican Church of Galesburg or to Veterans Helping Veterans.

The family of Harold W. Flinn, Jr. created this Life Tributes page to make it easy to share your memories.

Send flowers to the Flinn, family.