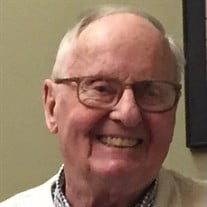 KNOXVILLE -- Gordon Floyd King of Knoxville, Ill., died Dec. 21 from complications of COVID-19 at the Richard L. Owens Hospice Home in Peoria. Gordon was born Nov. 30,1928, the third son of John and Allene (Jones) King in Canton, Ill. Together with older brothers Clell and Bob, he enjoyed a mischievous youth. After graduating from Canton High School, Gordon joined the family automotive business. Soon after that, he met the woman he adored, Clara Marie Black. They married May 27, 1951, and were blessed by the birth of two daughters, Julie and Judy. When their daughters were in high school, a close friend, M’len Clark, joined the family and was treated like a daughter. Gordon and Clara left Canton for the Galesburg/Knoxville area when he became a sales representative for the Prudential Insurance Company. Gordon was more than an insurance agent to his clients often helping them with non-insurance issues. Gordon and Clara loved their family. One of his greatest joys was playing with his grandchildren. They were especially proud of their Broad Street home in Knoxville. They were surrounded by many wonderful neighbors especially the Moores and Lockwoods. Gordon enjoyed his home and family, his dogs, his cars, and his yard. He also appreciated a good piece of pie. He was a quiet, kind man with a wonderful sense of humor. He was an avid sports fans and was always ready to talk about the latest game. He loved the St. Louis Cardinals and the University of Illinois sports teams. He followed Galesburg’s American Legion baseball team and also attended the sporting events of children of his family and their friends. He is survived by his daughters, Julie (Alan) Seeger and Judy (Brian) Holding, M’len (Dan) Simmons, and their 6 grandchildren. He was preceded in death by his wife, his parents, and his brothers. The family thanks Dr. Clyde Grady, Courtyard Estates in Knoxville, the nurses and doctors at St. Francis hospital in Peoria, and the Richard L. Owens Hospice House in Peoria for the kindness and compassion displayed while caring for their father. The family also thanks the staff at Knox County Nursing Home for their kindness to Gordon while his wife was a resident there.

The family of Gordon Floyd King created this Life Tributes page to make it easy to share your memories.

Send flowers to the King family.