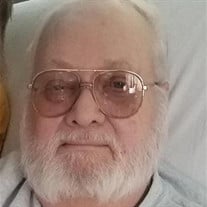 Glenn Lee Stegall, 76, of Gilson, passed away at home on Tuesday, March 30, 2021 at 5:46 AM. Glenn was born on May 18, 1944 in Abingdon. He was the son of Everett and Laura (Miles) Stegall. He married the love of his life, Lois (Rock) Young on March 30, 1974 at the Gilson Church. Together they built a life that would span 53 years with 47 of those years celebrated in marriage. Glenn is survived by his wife; daughter, Tina (Adam Whelchel) of Creve Coeur; two grandchildren, Matthew Stegall of Gilson and Brody Whelchel of Creve Coeur; four siblings, Clifford Stegall of Galesburg, Kathryn (Otis) Phillips of Paso Robles, CA, Dale (Claudette) Stegall of Gilson and Sandra Pittman of Oneida; and numerous nieces, nephews, cousins, and “adoptive” children and grandchildren. He was preceded in death by his parents. Glenn attended Gilson High School until his junior year and then went on to graduate at Knoxville High School in 1962. He then went on to become a Vietnam veteran in the US Army. Glenn worked for 41 years at Butler Manufacturing. He worked in the paint and welding department, retiring in 2004. Glenn and Lois were members of the Gilson Church until its closing. He was also on the board of the Gilson Cemetery. Glenn also helped to start the Gilson leg of the Knox County Scenic Drive and was on the board for 27 years. His brother, Dale, and himself had “Stegall Bros Antique Tractors,” Glenn would display his John Deere and Minneapolis Moline tractors, the rusty 38 Chevy, blacksmithing with the forge, and making apple cider with the cider press. He also participated in antique tractor pulling, drag racing, mud truck racing with the Gator Hunter trucks, and he enjoyed driving his horse and buggy. Glenn also loved to attend the Old Threshers Reunion, the Labor Day Celebrations at Lake Argyle and in Hamilton. Lois and he were also known to travel to the Amish community in Arcola and in Arthur, IL where they developed a very close kinship with one of the families and would visit every year. Glenn could also be found tending to his garden, where he took great pride in the produce that he grew. At one time, he had a garden that had over forty tomato plants, he had “tomatoes out the wazoo.” Most importantly, Glenn was a strong, hardworking, family-oriented man. His most favorite past time would be watching the many events that Matthew participated in while growing up. He was a man of his word, and never knew a stranger. He made sure that he had fun no matter what he was doing, and was born with the ability to “spin a yarn” even if it was a “tall tale.” His jubilant personality and big smile will be missed by those who loved him. Cremation rites will be accorded. A celebration of life will be held at a later date. A private family burial of cremated remains will be held at the Gilson Cemetery. Hurd-Hendricks Funeral Homes and Crematory, Knoxville has been entrusted with arrangements. On-line condolences and/or expressions of sympathy may be sent through www.hurd-hendricksfuneralhome.com.

The family of Glenn L. Stegall created this Life Tributes page to make it easy to share your memories.

Glenn Lee Stegall, 76, of Gilson, passed away at home on Tuesday,...

Send flowers to the Stegall family.