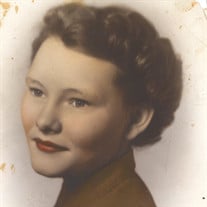 Georgia L. Shores, age 82 of Knoxville, Illinois died at 4:30 A.M. on Thursday, December 28, 2017 at the Knox County Nursing Home, Knoxville, Illinois. Georgia was born on May 2, 1935 in Dahinda, Illinois the daughter of Lloyd and Laura E.... View Obituary & Service Information

The family of Georgia L. Shores created this Life Tributes page to make it easy to share your memories.

Send flowers to the Shores family.