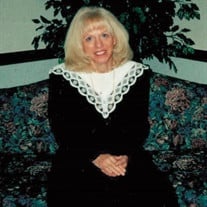 Georgia L. (Bordwell) Simmons, of Wataga, formerly Phoenix, Arizona, passed away on Wednesday, December 1, 2021 at her home. Georgia was born on April 11, 1943 in Aurora, Il. She was the daughter of Gordon and Elizabeth (Benedict) Bordwell. Georgia is survived by her sisters, Carolina Bordwell of Bensonville, IL and Leilani (Peter) Toureene of Wataga; nephew, Jonathan Bordwell; four nieces, Kathy (Ed) Williams, Tina (Mike) Caldwell, Christine (Vagen) Ohanian, and Johannah Muhs; five great nephews; three great nieces; and the many friends she made. She was preceded in death by her parents; brother, John G. Bordwell; and her nephew, Matthew Bradley. Georgia graduated from Knoxville High School and attended Brown’s Business College in Galesburg. She received her Business Management Degree from Phoenix College and attended Mericopa County Tech and Arizona State University. From 1966 to 1973, Georgia was the Manager in Records Management for U-Haul International. In 1974 she went on to become the Manager of Communication Services at the Western Savings and Loan of Arizona, she was also the Communications Service Manager when the bank became the Bank of America. Georgia answered her calling to serve as a missionary for the Church of Jesus Christ of Latter-day Saints in Canada from 1983 to 1984. After fulfilling her calling for mission work, Georgia worked in Human Resources at Glendale Elementary in Arizona until 1993. She then transferred her career in Human Resources to the Pheonix Day School for the Deaf until 1999 when she moved back to the Knox County, IL area and worked for the Illinois Credit Union League in Naperville, IL from 1999-2001. One would have to say that she really missed her Arizona connections, where she lived for 37 years. In 2001, she became a reflexologist and served her community until her retirement. Georgia was a member of the Church of Jesus Christ of Latter-day Saints, serving in many other callings since 1975. This included a calling to the Nauvoo Temple. Georgia was best known for her love of people (especially their health and welfare). She had a quest for always learning and loved family history work and was always willing to help others research their Genealogy. A celebration of Georgia’s life will be held at 10:00 AM on Saturday, December 11, 2021 at the Church of Jesus Christ of Latter-day Saints, 1977 E Freemont Street, Galesburg, Il 61401. A private burial was held at Oaklawn Memorial Gardens, Galesburg. Hurd-Hendricks Funeral Homes & Crematory has been entrusted with local arrangements. Memorials may be donated to a charity of the donor’s choosing. Cards and thoughts may be sent to the family in care of the Hurd-Hendrick’s Funeral Homes and Crematory, 120 South Public Square, Knoxville, Illinois 61448, or online at www.hurd-hendricksfuneralhome.com. As Georgia would say, “Always be thankful in all things, take time to pray and love one another.” To send flowers or a memorial gift to the family of Georgia Lee (Bordwell) Simmons please visit our Sympathy Store.
To send flowers to the family in memory of Georgia Lee (Bordwell) Simmons, please visit our flower store.

The Church of Jesus Christ of Latter-day Saints