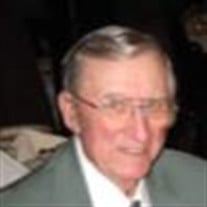 Gene E. Sherman, age 91, of rural Maquon, Illinois died on Thursday April 12, 2018 at his home surrounded by his family. Gene was born on September 23, 1926 in Galesburg, Illinois the son of Lynn O. and Doris G. (Galpin) Sherman. He married Josephine Ennis on August 25, 1950 in Yates City, Illinois, he then married Lorraine F. Farr Simpson on September 3, 1977 in Des Moines, Iowa. Lorraine preceded him in death on January 12, 2013. Surviving are his sons: Jerald Sherman of Watseka, Illinois, Edwin Sherman of Helena, Montana, Kathryn Powell of Maquon, Illinois, and Rosemary Friend of Kansas City, Missouri; step-sons: Jerry Simpson and Tom Simpson of near St. Louis, Missouri; eighteen grandchildren and thirty-four great-grandchildren; and one sister Charlotte Booth of Yates City, Illinois. He was preceded in death by his parents, wife, one step-son Larry, grandson Brian, two brothers, Charles and Gale. He served in the United States Army from March 3, 1945 to October 4, 1946 during World War II and during the Korean Conflict from September 27, 1950 to June 30, 1951. During his time in the service he received the American Theater Service Medal, Good Conduct Medal and the World War II Victory Medal. He farmed in rural Maquon, Illinois his entire life and worked for Caterpillar, Inc. for 27 years, retiring in 1991. He is a member of the Douglas United Methodist Church, the Horeb Masonic Lodge 363 A.F. & A.M. of Elmwood, Illinois, the Salem-Elba American Legion Post 461 of Yates City, Illinois. He also served on the Yates City School Board. He was an avid bowler and enjoyed reading, playing Solitaire and loved being with family and friends. Private Graveside Services will be held at a later date at Memorial Park Cemetery in Galesburg, Illinois. Memorials may be made to the Greater Peoria Honor Flight online at www.greaterpeoriahonorflight.org, in care of the family or the funeral home.

Gene E. Sherman, age 91, of rural Maquon, Illinois died on Thursday April 12, 2018 at his home surrounded by his family. Gene was born on September 23, 1926 in Galesburg, Illinois the son of Lynn O. and Doris G. (Galpin) Sherman. He married... View Obituary & Service Information

The family of Gene E. Sherman created this Life Tributes page to make it easy to share your memories.

Send flowers to the Sherman family.