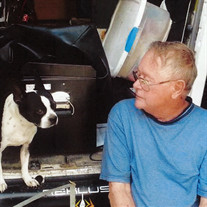 Garreth L. “Garry” Hardy, age 78 of Galesburg, Illinois died on Thursday, March 29, 2018 at 6:16 A.M.at the Knox county Nursing Home in Knoxville, Illinois Garry was born on March 27, 1940 in Galesburg, IL to Leroy A. and Catherine L. (Fenn) Hardy. He is survived by one brother Allen (Gloria) Hardy of Foley, Alabama; one nephew, Gerrald “Butch” Hardy of Berwick, Illinois, and his extended family and caregivers, “Movin” Mike and Kathy Caves, Jimmy Morgan, and “Itchy” Bickerton, and his beloved doggie daughter, Maggie. He was preceded in death by his parents and one nephew Lonnie Hardy. He graduated from Galesburg High School in 1958. He worked for the former Gale Products (OMC), and Maytag; he also worked for Midstate Manufacturing of Galesburg, Illinois, Pit Boss of Monmouth, IL, and for Rick Jones. He was a member of the Galesburg and Macomb Motorcycle Clubs. He loved motorcycle racing and building engines. He sponsored and mentored many local racers. A Celebration of Life will be held on Saturday, June 16, 2018 from 2:00 P.M. to 5:00 P.M. at the Galesburg Motorcycle Club, 2450 U.S. Highway 150, Rio, Illinois 61472. Hurd-Hendricks Funeral Homes & Crematory is assisting the family with his wishes. Memorial contributions may be made to the Family for the care of Maggie, sent to Mike and Kathy Caves at 1724 Bateman Street, Galesburg, Illinois. Online condolences and expressions of sympathy may be made through www.hurd-hendricksfuneralhome.com.

The family of Garreth "Garry" L. Hardy created this Life Tributes page to make it easy to share your memories.

Send flowers to the Hardy family.