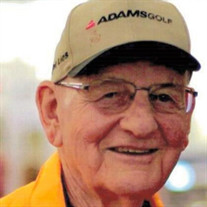 Gale Lee Adams, 91, of Oneida died at home on January 8, 2021 surrounded by family. He was born on April 12,1929 to Stanley and Marie (Thuline) Adams. He graduated from Oneida High School in 1947 and went to work for Carlson Equipment. He joined the army in 1951 and served as a corporal on administrative duty in Germany until 1953. He married LaVonne Holmes on September 5, 1953 at Immanuel Lutheran Church of Altona. She preceded him in death on February 6, 2017. Gale is survived by two daughters, Sharon (Gerry) Peterson and Cheryl (David) Erickson; two grandchildren, Jennifer Peterson and Scott Erickson; one sister-in-law, Elaine (Terry) Bolin; and one brother-in-law, Charles Knapp. He was preceded in death by his wife, LaVonne, brother, Maynard Adams, and sister, Virginia Cruce. In 1953, Gale went to work for Butler Manufacturing. He worked as an industrial packaging engineer and an industrial engineering methods analyst. He served as the co-chairman of the Employee’s United Fund, and co-invented a patented building materials packaging. He retired from Butler in 1990, but continued to act as a consultant for the Galesburg Engineering Department and Kansas City Engineering Department until 1993. Gale was an avid golfer and could be found at Bunker Links nearly every Saturday morning. He sang all his life - in the church choir, for weddings and funerals, and as part of Choral Dynamics. He was a member of the Immanuel Lutheran Church of Altona where he served as the president of the church board and chairman of the building committee. He also served as president of the Oneida Lions Club and treasurer of the Oneida sanitary district. He enjoyed fishing, tinkering in his garage, and keeping people laughing with his quick wit and exaggerated stories. He was the entertainment at his family’s frequent gatherings, and the impetus behind many family vacations and adventures. His wisdom, humor, and pragmatic yet whimsical approach to life will be missed. Due to the pandemic, a private family service will be held on Wednesday, January 13, at Immanuel Lutheran Church, Altona. Burial will be held at the Oneida Cemetery, Oneida. Pastor Tim Anderson will be officiating. Hurd-Hendricks Funeral Homes and Crematory, Oneida has been entrusted with arrangements. In lieu of flowers, memorials may be made in remembrance of Gale to the Immanuel Lutheran Church or the A,O & W Ambulance Service. Online condolences maybe left to the family at www.hurd-hendricksfuneralhome.com.

Gale Lee Adams, 91, of Oneida died at home on January 8, 2021 surrounded by family. He was born on April 12,1929 to Stanley and Marie (Thuline) Adams. He graduated from Oneida High School in 1947 and went to work for Carlson Equipment. He... View Obituary & Service Information

The family of Gale Lee Adams created this Life Tributes page to make it easy to share your memories.

Send flowers to the Adams family.