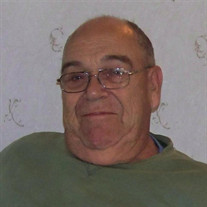 Eugene Louis (Gene) Lievens of Knoxville was called to his heavenly home on December 9, 2020 at the age of 86. He was born on September 28, 1934 in Prophetstown IL to Louis and Mary (Sturtewagon) Lievens. Gene had a love of farming and tractors since childhood. He attended the local grade school and became a farm hand at the age of 13, working and living on the Garland Jackson farm near Prophetstown. A few years later, during a Saturday night in town, he met the love of his life, Evelyn White, at a burger joint in Geneseo IL. They were married on February 4, 1956 and began renting farmground outside of Cambridge IL. They farmed together for the next 46 years, moving to the Dahinda area in 1961. Gene and Ev bought their own farm near Williamsfield in 1968. In addition to farming, Gene worked other full-time jobs like Gates Rubber Company in Galesburg. Later he worked at various strip mining locations (Wyoming, Canton & Middle Grove). Gene was a “self-taught” welder, always working a third shift gig so he could work his farm during the day. For many years, Gene enjoyed entering his tractors in summer tractor pulls throughout central Illinois, earning many first place finishes with his beloved "Minnie Mo". Gene and Evelyn sold their farm and retired to Knoxville in 2002. But Gene could never fully retire, and worked part-time at FS, Birkeys, as well as hauling grain during harvest. He and Ev enjoyed attending and camping at the Old Thresher's Reunion in Mt Pleasant, Iowa over many Labor Day weekends. Gene was also a movie buff his whole life, enjoying Westerns & John Wayne. His favorites were definitely the Love stories though, since he was a romantic at heart. He is survived by three daughters, Valerie Lukens of Trenton IL, Debbie Lievens of Phoenix AZ, and Lori Helvick of Mapleton IL; eight grandchildren; eleven great-grandchildren; brother Richard (Betty ) Lievens of Osco IL and brother-in-law Kenneth Cathelyn of Geneseo IL; as well as several nieces and nephews and many friends. He is preceded in death by his wife of almost 65 years, passing just seven days before him; his parents; brothers Lawrence and Robert Lievens and sister Lucille Cathelyn. Visitation will be held on Sunday, December 13, 2020 from 1-4 PM, at Hurd-Hendricks Funeral Homes and Crematory, Knoxville. Graveside services will be 11:00 AM, on Monday, December 14th , 2020 at the Knoxville Cemetery, Knoxville, Illinois. DUE TO COVID-19 RESTRICTIONS, FACE MASKS, SOCIAL DISTANCING and ATTENDANCE GUIDELINES WILL BE ENFORCED. Hurd-Hendricks Funeral Homes and Crematory, Knoxville has been entrusted with arrangements. Memorials may be donated to the Guardian Angels of Knox County. Expressions of sympathy may be left for the family at www.hurd-hendricksfuneralhome.com.

Eugene Louis (Gene) Lievens of Knoxville was called to his heavenly home on December 9, 2020 at the age of 86. He was born on September 28, 1934 in Prophetstown IL to Louis and Mary (Sturtewagon) Lievens. Gene had a love of farming and tractors... View Obituary & Service Information

The family of Eugene L. "Gene" Lievens created this Life Tributes page to make it easy to share your memories.

Eugene Louis (Gene) Lievens of Knoxville was called to his heavenly...

Send flowers to the Lievens family.