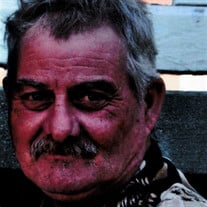 Eugene L. Briggs, age 64, of Gilson, Illinois, died at 9:14 P.M. on Saturday, January 20, 2018 at the St. Francis Medical Center in Peoria, Illinois. He was born on November 27, 1953 in Galesburg, the son of Arnold C. and Darlene L. Briggs Thompson. He married Floris L. Wells, his wife of 43 years, on May 3, 1974 in East Galesburg, she survives. Also Surviving are four children: Eugene (Racheal) Briggs of Galesburg, Patty Briggs of Walnut, Missy (Brian) Hurst of Elmwood, and Michael Briggs of Gilson; nine grandchildren: Krista, Kimmy, Allan, Haylee, Brindle, Brice, Nick, Mason and Lilly; one brother, Billy (Sally) Thompson of Galesburg; and many nieces and nephews. He was preceded in death by his parents; five brothers: Bobby, Junior, Jerry, Donnie, Jimmy; and one sister, Carol. In his youth he worked at Aluminum Castings in Galesburg, and for Meehan Trucking for 25 years. He enjoyed fishing, going to auctions, watching wrestling, metal scraping, walking his dog, and being with family and friends. Visitation will be held from 5:00 P.M. to 7:00 P.M.,with a funeral service beginning at 7:00 P.M. on Thursday, January 25, 2018 at the Hurd-Hendricks Funeral Home & Crematory in Knoxville. Rev. Krey Lessman will officiate. Memorials may be made to the family. On-line condolences and expressions of sympathy may be made through www.hurd-hendricksfuneralhome.com

The family of Eugene L. Briggs created this Life Tributes page to make it easy to share your memories.

Send flowers to the Briggs family.