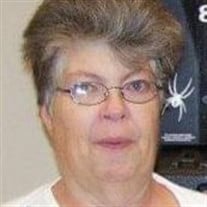 Elizabeth “Jane” J. (Fox) Streeter, age 66, of Galesburg, Illinois died at 11:30 P.M. on Saturday, January 19, 2019 at her home in Galesburg. She was born on May 29, 1952 in Galesburg, the daughter of Robert and Betty (Swank) Derry. She was raised in Galesburg and Abingdon, Illinois, graduating from Galesburg High School. She married Garry Lee Fox, Sr., on January 21, 1977 in East Galesburg, Illinois. He preceded her in death on February 6, 1999. She then married Robert Streeter on January 10, 2002 in Cambridge, Illinois. He preceded her in death in August of 2003. Surviving are her sons: Chris D. Fox of Peoria, Illinois, Corey (and Brandie) Fox of Galesburg, Illinois, Gary L. Fox, Jr. of Galesburg, Illinois and Sean M. (and Belinda) Fox of Galesburg, Illinois; sixteen grandchildren; and two great-grandchildren. Also surviving are her brothers and sisters: Karen (and Mike) Vanausdall of Hillsdale, Illinois, Ed Derry of Monmouth, Illinois and Glen Allen Derry of Abingdon, Illinois. She was preceded in death by her parents and husbands. Elizabeth worked as a CNA in the Knox County area, working in various nursing homes. When she was younger, she enjoyed playing darts. She loved watching her grandsons play baseball and enjoyed spending time with all of her grandchildren. She also loved to hang out with everyone and she was a mom to everybody. Funeral Services will be held on Wednesday, January 23, 2019 at 11:00 A.M. at the Hurd-Hendricks Funeral Homes & Crematory in Knoxville, Illinois. Visitation will be held from 6:00 to 8:00 P.M. on Tuesday, January 22, 2019 at the Hurd-Hendricks Funeral Home & Crematory in Knoxville, Illinois. A potluck will be held at the Hurd-Hendricks Fellowship Center prior to the burial at the Victoria Cemetery in Victoria, Illinois. Memorial contributions may be made to the family.

The family of Elizabeth "Jane" J. Streeter created this Life Tributes page to make it easy to share your memories.

Send flowers to the Streeter family.