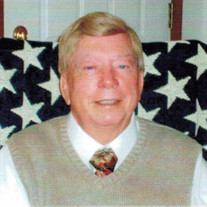 Eldred Harrelson, 88, of East Galesburg, passed away with his daughters at his side, on Tuesday, July 28, 2020, 10:28 PM, at Heartland Healthcare Center, Galesburg. Eldred was born on August 30, 1931 in Tabor City, North Carolina. He was the son of Auty W. and Edna M. (Stevenson) Harrelson. Eldred married Ivey Dean Fowler on November 8, 1949 in Conway, South Carolina. Together they celebrated 56 years of marriage. They were loving parents to two daughters, Patricia and Sylvia. Ivey preceded him in death on June 19, 2006. He later married Judith Pecharich on October 5, 2007 in Knoxville. Eldred is survived by his loving daughters, Patricia (Phil) Morrison of Galesburg and Sylvia (Jim) Abell of Zion; five grandchildren Kimbery (Jeff) Luberts, Justin (Katie) Morrison, Bryan Abell, Benjamin Abell, and Jessica (Mike) Carroll; six great grandchildren, Cole, Benjamin, Andrew, Madelyn, Jack and Noah; his wife, Judy of Knoxville; two step daughters, Darice (Johnny) Inness and Dorethea (Victor) Harris; and several step-grandchildren. Along with his loving wife Ivey, Eldred was preceded in death by his parents and two siblings, Durwood and William Auty Harrelson. Eldred worked for the City of Galesburg for 25 years. He started in the Parking Meter Division then transferred to the Water Department, finally retiring from the Street Division. He was a member of the First Baptist Church in Galesburg. Eldred loved gardening and muscle cars. He was a loving husband and father, who treasured spending time with his family. Eldred will be missed greatly. Cremation rites have been accorded. A private burial of cremated remains will be held at the Knoxville Cemetery. Arrangements have been entrusted with Hurd-Hendricks Funeral Homes and Crematory. Online condolences may be left to the family at www.hurdhendricks.com.

Eldred Harrelson, 88, of East Galesburg, passed away with his daughters at his side, on Tuesday, July 28, 2020, 10:28 PM, at Heartland Healthcare Center, Galesburg. Eldred was born on August 30, 1931 in Tabor City, North Carolina. He was... View Obituary & Service Information

The family of Eldred Harrelson created this Life Tributes page to make it easy to share your memories.

Eldred Harrelson, 88, of East Galesburg, passed away with his...

Send flowers to the Harrelson family.