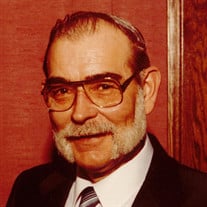 Edward Melsha, 89, of Galesburg, passed away peacefully at home, Sunday, August 8, 2021, 7:20 PM, with his family at his side. Edward was born on February 24, 1932 in Cedar Rapids, Iowa. He was the son of Louis and Pearl (Harper) Melsha. He married Evelyn Maxine Kriz, and together they built a life that spanned 67 years. She preceded him in death on January 24, 2021. Edward is survived by his children, Ron (Gwen) Melsha of Solon, Iowa, Rene Hagen of Moline, Randy (Deb) Melsha of Kalona, Iowa and Robin Admire of London Mills; siblings, Paul (Gloria) Melsha of Harpersferry, Iowa and Cora Ann (Tony) Giza of Anamosa, Iowa; three grandchildren, Aimee Hagen, Jessica Hagen and Kolby Melsha and two great-grandchildren, Kayla and Emma. He was preceded in death by his parents and brother, Richard (Ellen) Melsha. Edward was a 1950 graduate of Wilson High School. He was a veteran of the United States Army, serving from 1952-1960. After the Army, Edward worked as a cook and then owned and operated his own gas station in Cedar Rapids. Edward also built and managed a mobile home park for 20 years. In 1975, Edward went to work for Oral B Manufacturing (formerly Owens Brush) as a machinist, retiring in 1995 after 20 years of service. In his free time, Edward was an outdoors man and loved to hunt, fish, camp and garden. He also loved traveling with Evelyn. He was a “foodie” logging information on restaurants that he would eat at, and according to his children, would have made a good food critic. Most of all, Edward loved his family and spending time with them. Cremation rites have been accorded. A gathering to celebrate the lives of Ed and Evelyn will be held from 1:00-3:00 p.m. on Saturday, August 21, 2021 at Lensing’s Oak Hill, 210 Holiday Road in Coralville. Hurd-Hendricks Funeral Homes and Crematory, Knoxville and Lensing Funeral and Cremation Service, Iowa City have been entrusted with arrangements. In lieu of flowers, memorials may be made to the family so a memorial bench in honor of Ed and Evelyn may be purchased. Expressions of sympathy may be left to the family at www.hurd-hendricksfuneralhome.com and lensingfuneral.com.

The family of Edward Melsha created this Life Tributes page to make it easy to share your memories.

Edward Melsha, 89, of Galesburg, passed away peacefully at home,...

Send flowers to the Melsha family.