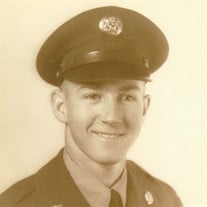 Edward L. “Deke” Johnson, 82, of Galesburg, Illinois passed away at his home on Tuesday, April 2, 2019 at 3:18 A.M. Edward was born on July 18, 1936 in Peoria, Illinois, the son of Frank and Helen (Hornbacks) Johnson. After graduating from Knoxville High School, Edward joined the United States Army. He proudly served his country stationed in Germany. He then married Bonnie Anderson on October 23, 1965 in Galesburg, Illinois. Edward worked for Galesburg Malleable for 45 years, first as a Molder and later as a Supervisor. He truly loved his job. He was a die-hard Chicago Cubs fan and a great bowler. He also enjoyed going to the Casino. He is survived by his loving wife of 53 years, Bonnie Johnson of Galesburg; 3 children, Raymond Lee Johnson, Teresa Lynn Johnson, Charles Franklin Johnson; 7 grandchildren, Jordon, Jared, Pedro, Ashley, Memphis, Audrey, Aarron; 3 great-grandchildren; Hazel, Wyatt, Aria; and 4 siblings, Larry, Donnie, Sue, and Kathy. He was preceded in death by his parents, Frank and Helen Johnson; and 3 brothers, Charlie, Dave, and Gary. Visitation will be held Saturday, April 6, 2019 from 10:00 A.M. to 11:00 A.M. at the Hurd-Hendricks Funeral Home in Knoxville. The funeral service will directly follow at 11:00 A.M. Interment will be at the Knoxville Cemetery. Rev. Marty Smith will be officiating the services. Memorial contributions may be left to the family. Online condolences can be made at www.hurd-hendricksfuneralhome.com

The family of Edward L. Johnson created this Life Tributes page to make it easy to share your memories.