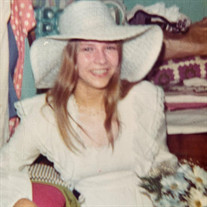 Dorothy J. “Dot” Olson, 62, of Oneida, passed away peacefully on Sunday, May 23, 2021, 9:21 PM, at OSF St. Mary Medical Center. Dot was born September 29, 1958 in Galesburg. She was the daughter of Frank and Ruby (Adams) Norton. Dot married Gary Olson on April 16, 2016 in Galesburg. She is survived by her loving husband, Gary; children, Tina Voyles of Galesburg, Shane Olson of Davenport and Amy (Skyler) Cauthon of Galesburg; grandchildren, Ashley (Chris) Jern of Abingdon, Steven Wallace of Galesburg, Lyxander, Demitrius, and Cheylynn Cauthon and Grace and Bentley Olson; siblings, Catherine Simkins of Galesburg, Mary Norton of Galesburg, Debra Cassens of East Galesburg, Pat Holman of Galena and Juanita Hackman of Rockford; and three great grandchildren, Madilynn and Makenzie Jern, and Kartur Wallace; and nieces and nephews, Sue (Carl), Faith, Jerry (Brenda); and many great nieces and nephews . She was preceded in death by her parents; a daughter, Lisa Lodwick; and six siblings, Richard, Stella, Christopher, Michael, Robert and Doris, and nephew, Billy. Dot attended Monmouth Schools and then later Carl Sandburg College. She worked as a CNA and then later was the Social Services/Activity Director for Galesburg Terrace and Aperion Care Center until her retirement. She was an avid Chicago Cubs and Bears fan. Halloween was her favorite holiday and took joy in scaring people. She also loved listening to the scanner and waiting for the mailman, taking off in her car for a car ride. She would often jump in the car and take off to her niece’s house in Missouri for some “coffee talk” and turn around and come right back home. She was a selfless woman, always putting the needs of others before her own. Dot was an animal lover too. She was always feeding the squirrels and “her birds” and had an infinite love for her dogs. Most importantly, Dot centered her life around her family, she loved to spend time with her siblings and most importantly grandchildren and great-grandchildren. Cremation rites have been accorded. Services will be held at a later date. Hurd-Hendricks Funeral Homes and Crematory, Knoxville have been entrusted with arrangements. Expressions of sympathy may be shared with the family at www.hurd-hendricks.com.

The family of Dorothy "J" Dot Olson created this Life Tributes page to make it easy to share your memories.