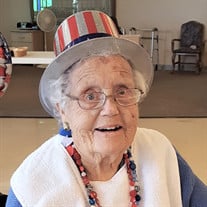 Doris L. Cooley, age 90, of Knoxville, Illinois, died at 10:18 P.M. on Thursday, August 30, 2018 at the Knox County Nursing Home in Knoxville. She was born on June 2, 1928 in Galesburg, Illinois, the daughter of Ray G. and Lenore (Campbell) Peterson. She was raised by her mother, Lenore, and step-father, Luther Sandridge. Doris was reared and educated in the Galesburg area, and graduated from Galesburg High School. On October 19, 1946, she married Charles O. “Chuck” Cooley in Galesburg. He preceded her in death on July 18, 2002. Surviving are her children: Sharon (and Terry) Farquer of Dahinda, Illinois, R. Keith (and Teresa) Cooley of Wyoming, Illinois; a daughter-in-law, Karen Cooley of Dahinda; eleven grandchildren; four step-grandchildren; twenty-three great grandchildren; a sister-in-law, Sarah Katherine Vollbracht of Quincy, Illinois; many nieces and nephews; and special friends, the Nordberg family of Duluth, Minnesota. Doris was preceded in death by her parents; husband; a daughter, Nancy Stephens; a son, Charles A. Cooley II; and a sister, Jean Baxter. Doris enjoyed working as a school bus driver for District 202. She was a member of TOPS, and volunteered her time to Meals on Wheels and Food Lift for Cottage Hospital. Doris was also an active member of her church, the Knoxville United Methodist Church in Knoxville. Visitation will be held on Wednesday, September 5, 2018 from 10:00 A.M. to 11:00 A.M. at the Knoxville United Methodist Church in Knoxville, Illinois. The Funeral Service will directly follow at 11:00 A.M., Rev. John Knueppel officiating. Interment will be at the Oak Lawn Memorial Gardens in Galesburg, Illinois. Memorials may be made to the Knoxville United Methodist Church or the Dahinda United Methodist Church.

The family of Doris L. Cooley created this Life Tributes page to make it easy to share your memories.

Send flowers to the Cooley family.