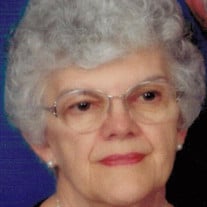 Dorcas A. Fry, age 88, of Knoxville, Illinois died at 7:10 P.M. on Tuesday, February 9, 2021 at Courtyard Estates in Knoxville, Illinois. She was born on August 27, 1932, the daughter of Kenneth O. and Mildred M. (Cravens) Witherall. She married... View Obituary & Service Information

The family of Dorcas A. Fry created this Life Tributes page to make it easy to share your memories.

Send flowers to the Fry family.