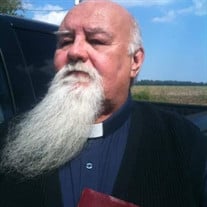 Rev. Donald R. Williams, 73, of Knoxville, passed away on Monday, April 19, 2021, at 1:06 PM, OSF St. Mary Medical Center, Galesburg. Rev. Donald was born on June 28, 1947 in Toledo, Ohio. He was the son of Donald B. and Elberta (Shelton) Williams. He married the love of his life Mary Ann Sloan on July 3, 1964 in Toledo, Ohio. Together they celebrated 57 years of marriage. Rev. Donald is survived by his loving wife, Sue at home; his children, Donald Williams of Peoria, Kimberly Elliot of Knoxville, Richard L. (Dana) Williams of Pekin and Edward B. Williams of Jacksonville, Florida; siblings, Rev. Bill Williams of Chatsworth and Sonja Bailey of Brush, Colorado; 18 grandchildren; and 26 great-grandchildren. He was preceded in death by his parents, a daughter, Melissa and grandson, Jacob, grandson, Mitchel, a great-granddaughter MaKenzie, and a great-grandson, Justin. Rev. Donald graduated from Peoria Richwoods High. He then went on to the Covington Bible Institute. He received his Master’s Degree in Theology. Rev. Donald was a minister for the 1st Baptist Church in Welaka, Florida for many years. He has been the minister for the 1st Christian Church of Knoxville, IL for the last 5 years. He was a member of the Minister’s Alliance. Rev. Donnie enjoyed riding his Harley. He was a member of the Black Pistons MC 200-2005. He was the director of the Twice His Coffee House on Main Street in Peoria in the 1980’s. He was the night supervisor at the Christian Center in Peoria in the 2000’s. Rev Donald loved to spend time with his family and his dogs. He was loved by many – as he touched many. Cremation Rites will be accorded. There will be a celebration of life in May, with the date and time to be shared at a later date. Hurd-Hendricks Funeral Homes and Crematory, Knoxville have been entrusted with arrangement. Memorials may be made to the family. A “Go Fund Me” page has been established at the following link, https://gofund.me/6ff75705. On-line condolences and/or expressions of sympathy may be sent through www.hurd-hendricksfuneralhome.com.

The family of Rev. Donald R. Williams created this Life Tributes page to make it easy to share your memories.

Send flowers to the Williams family.