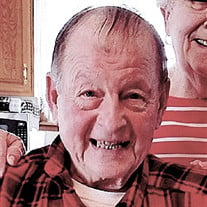 Don D. McCoy, age 81, of Gilson, Illinois, died at 9:59 A.M. on Tuesday, October 16, 2018 at the Marigold Rehabilitation and Healthcare Center in Galesburg, Illinois. He was born on Saturday, March 6, 1937 in Galesburg, the son of Leslie and Maxine (Brown) McCoy. Don was reared and educated in the Knoxville, Illinois area, graduating from Knoxville High School in 1955. During his high school years, he greatly enjoyed playing on the football team as a center. On June 27, 1958, he married Lowanda “Tyke” Shreeves at the First Baptist Church in Galesburg. Don is survived by his wife of sixty years, Lowanda “Tyke” McCoy of Gilson; their three children: Randy (and Tracy) McCoy of Knoxville, Rodney (and Sherry) McCoy of Maquon, Illinois, Jane (and Tyler) Moore of Springfield, Missouri; four grandchildren: Kristen (and Ryan) Patty of Washington, Illinois, Matthew McCoy of Galesburg, Hannah McCoy of Maquon, Jared (and Brylee) Moore of Springfield, Missouri; two great-grandsons: Russell Dean Patty, Brody Wayne Moore; and one sister, Jean (and Bob) Malone of Gilson. He was preceded in death by his parents. He worked at Maytag as a welder for forty years, until his retirement in 1995. Don was also licensed as a horse farrier in Illinois for thirty-five years. He loved spending time in the great outdoors, especially hunting and fishing. Other pastimes he enjoyed were raising and racing standard breed race horses; he held a track record at the Chicago Fair in Illinois and also in Iowa, and was a member of the United States Trotting Association. Cremation rites will be accorded. A graveside memorial service will be held at 10:30 A.M. on Friday, October 19, 2018 at the Haynes Cemetery in rural DeLong, Illinois. Rev. Jordan Knight will officiate. Inurnment will be at the Haynes Cemetery in rural DeLong. A fellowship gathering at the Hurd-Hendricks Fellowship Center in Knoxville will follow the service. Memorial contributions may be made to Hospice Compassus or the Galesburg Rescue Mission.

Don D. McCoy, age 81, of Gilson, Illinois, died at 9:59 A.M. on Tuesday, October 16, 2018 at the Marigold Rehabilitation and Healthcare Center in Galesburg, Illinois. He was born on Saturday, March 6, 1937 in Galesburg, the son of Leslie and... View Obituary & Service Information

The family of Don D. McCoy created this Life Tributes page to make it easy to share your memories.

Send flowers to the McCoy family.