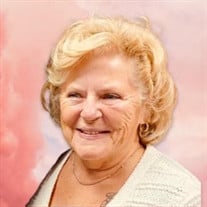 Diane Gilman, 75, of East Galesburg, passed away on Thursday, December 30, 2021. Diane was born on April 19, 1946 in Moline. She was the daughter of Aaron Oscar Montgomery and Margaret Elizabeth Robinson and Elaine (Sili) Montgomery. She married William “Hobie” Gilman on September 19, 1998 in East Galesburg. He preceded her in death on October 21, 2016. Also preceding her in death was her mother Margaret Robinson and father Aaron Montgomery. Diane is survived by her mother, Elaine Montgomery of Galesburg; children, Aaron (Anne) Hudson of Martinsville Indiana, Joshua Hudson of East Galesburg and Shannon Thompson of Kansas City, MO; five grandchildren, Chloe and Corinne Cowgur of Martinsville, Indiana, Bryce (Presley Weddle) Thompson, Brayden Thompson, and Ella Thompson all of Kansas City, MO and Hayley Gilman of Kansas City; brother, Michael (Nada) Montgomery, nephew, Steve Montgomery, and niece, Natalie Montgomery-Schmidt. Diane had a very successful career in the insurance industry. She was also on the Board of Trustees for the Village of East Galesburg and served as the treasurer for Jack Harlan’s Campaign. Diane was a member of the women’s golf league at Soangetaha Country Club and supported multiple charities. Being the fun loving good hearted person that she was, Diane would always help anyone who asked and was committed to her family, friends and her community. She enjoyed spending time in Las Vegas and traveling with her family and friends. Cremation rites have been accorded. A Celebration of Life will be from 4-7 PM on Saturday January 8, 2022 at Big Catz, 221 E Main Street Knoxville, Illinois. Russell Preston will be the officiant. Memorials may be made to the family where charities will be chosen at a later date. On-line condolences and/or expressions of sympathy may be sent through www.hurd-hendricksfuneralhome.com Word

Diane Gilman, 75, of East Galesburg, passed away on Thursday, December 30, 2021. Diane was born on April 19, 1946 in Moline. She was the daughter of Aaron Oscar Montgomery and Margaret Elizabeth Robinson and Elaine (Sili) Montgomery. She married... View Obituary & Service Information

The family of Diane Gilman created this Life Tributes page to make it easy to share your memories.

Diane Gilman, 75, of East Galesburg, passed away on Thursday,...

Send flowers to the Gilman family.