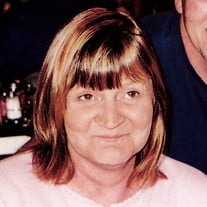 Debra L. Brush, age 60, of Galesburg, Illinois, died at 10:14 A.M. on Thursday, October 25, 2018 at her home in Galesburg. She was born on November 7, 1957 in Galesburg, the daughter of Robert Wayne and Patricia (Teel) Brush, and was reared and educated in the Knoxville. She was previously married to Curtis D. Lawson, and they were married in Wataga, Illinois. Debra is survived by her father, Robert Wayne Brush of Galesburg; her brother, Randy W. (and Cathie) Brush of Galesburg; her sister, Hope L. (and Daniel) Goad of Galesburg; and three nephews: Roger W. Brush, Keith A. Brush, and Kevin D. Brush, all of Galesburg. She was preceded in death by her mother. Debra loved the fall season, especially celebrating Halloween. She always enjoyed a good practical joke, and also loved spending quality time with her family, friends, and beloved pets. Cremation rites will be accorded. Private graveside services will be held at the Knoxville Cemetery. Hurd-Hendricks Funeral Homes and Crematory in Knoxville, Illinois is assisting the family. Memorial contributions may be made to the family in care of Hurd-Hendricks Funeral Homes, 120 South Public Square, Knoxville, Illinois 61448.

The family of Debra L. Brush created this Life Tributes page to make it easy to share your memories.

Send flowers to the Brush family.