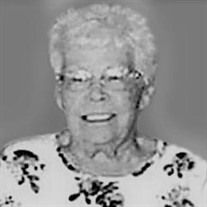 Darlos Maxine Mosher, age 82, of Galesburg, Illinois died at 12:53 P.M. on Monday, June 1, 2020 at the Richard L. Owens Hospice Home, Peoria, Illinois. She was born on January 28, 1938 in Galva, Illinois the daughter of Robert and Darlos (Larner) Lambert. She attended Knoxville High School. She married Hollis M. Mosher on May 9, 1954 in Rural Delong, Illinois. He preceded her in death on November 20, 2013. Surviving are her children: Vicky (Daniel Gordon) Metelka of Dahinda, Illinois, Debra (Jeff) McCue of Wataga, Illinois, Susan (Joel) Poole of Baldwin, Florida, Laura (David) Wilson of Knoxville, Illinois and Kathy (Tony) Presley of Galesburg, Illinois; ten grandchildren, and numerous great grandchildren and great-great grandchildren. Also surviving is a sister, Mary Wagher of Knoxville, Illinois. She was preceded in death by her parents, husband, one brother, Roger Lambert and one granddaughter, Christine Metelka. She worked as an LPN in nursing home throughout the Galesburg and Knoxville areas. She was a member of the Grace Lutheran Church of Knoxville, Illinois. She enjoyed sewing, needlework and quilting. Cremation rites have been accorded. Per her wishes there will be no services at this time. Memorial contributions may be made to the Richard L. Owens Hospice Home in Peoria, Illinois. Online condolences and expressions of sympathy may be made through www.hurd-hendricksfuneralhome.com.

The family of Darlos M. Mosher created this Life Tributes page to make it easy to share your memories.

Send flowers to the Mosher family.