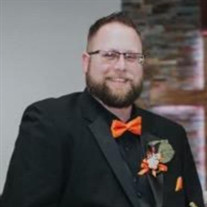 Clinton Lee Anthony Masters, 34, of Knoxville, passed away on Tuesday, November 2, 2021, 9:48 PM at OSF St. Francis Medical Center, Peoria. Clinton was born on March 30, 1987 in Galesburg. He was the son of Marvin and Angela (Anderson) Masters. Clinton married the love of his life, Ashley Johnson-Doubet on February 22, 2020 at the First Church of Nazarene in Galesburg. Clinton is survived by his loving wife, Ashley; children, Hannah (Haley) Burge of Galva, Emma Perdue of Knoxville and Ava Rose Masters of Knoxville; mother, Angela Masters of Galesburg; sister, Tabitha (Austin) Vick of Brockport, NY; paternal grandparents, Marvin and Helen Masters of Galesburg; in-laws, Angela (Steven) Johnson of Joliet, Scott (Patti) Johnson of Hannibal and Jeannie (Don) Henry of Gilson; aunts, Kathleen (Dave) Klinefelter of Spring Valley, Holly (Pat) Fox of Portland, OR, Brenda Nickas of Knoxville, Jean Masters of Springfield, and Grace Nickas of Peru; uncle, Roger Anderson; brothers-in-law, Cody Johnson and Tyler Johnson, both of Gilson, Matthew (Jayme) Johnson of Morris; sister-in-law, Hailey Johnson of Gilson; grandparents-in-law, Dorrance and Carol Doubet of Maquon; best friend, Matt Woods of Oneida; and his fur baby, Hazel. He was preceded in death by his father, Marvin; infant brother, Michael Lee Anthony; and maternal grandparents, Sally and Roger Anderson. Clinton was a 2005 graduate of Galesburg High School. He attended Carl Sandburg College, where he took auto mechanics courses. Clinton was a member of the First Church of the Nazarene in Galesburg. He was a sales clerk for Thornton’s Pet Supplies, drove a tow truck for Bolin’s, worked in the building materials department of Menards for 11 years; he was also a maintenance man for Seminary Manor, a laborer for Midwestern Building Supply and for the last three years was working at R.P. Lumber. Clinton’s love was construction. He worked alongside his father in their family business “Masters’ Construction”, and had taken over the business after Marvin’s passing. Clinton was a spontaneous character that loved to dance especially if there was no dance floor. His world centered around his family, especially his daughters. Clinton loved playing games, cards and watching movies with his family. Clinton was all about family. When not working or spending time with his family, Clinton could be found hunting, fishing or working on demo cars and racing at a demo derby. His loving personality and spontaneity will be missed by those that loved him. He was always willing to lend a helping hand for those in need. Visitation will be Thursday, November 11, 2021 from 11:00 AM – 1:00 PM at the First Church of the Nazarene, 1501 Webster St, Galesburg, IL 61401, funeral services will follow visitation at 1:00 PM at the church. Cremation rites will follow services. Pastor Harold Berrian will officiate. Due to the new COVID-19 Mask Mandate, the funeral home will maintain compliance and ask that guests wear a mask. Hurd-Hendricks Funeral Homes and Crematory have been entrusted with arrangements. Memorials may be donated to the family. On-line condolences and/or expressions of sympathy may be sent through www.hurd-hendricksfuneralhome.com.

Clinton Lee Anthony Masters, 34, of Knoxville, passed away on Tuesday, November 2, 2021, 9:48 PM at OSF St. Francis Medical Center, Peoria. Clinton was born on March 30, 1987 in Galesburg. He was the son of Marvin and Angela (Anderson) Masters.... View Obituary & Service Information

The family of Clinton Lee Anthony Masters created this Life Tributes page to make it easy to share your memories.

Clinton Lee Anthony Masters, 34, of Knoxville, passed away on...

Send flowers to the Masters family.