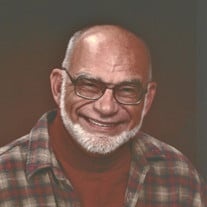 Clarence A. Clark, 80, of Galesburg, IL died peacefully on Sunday, January 20, 2019. Clarence was a loving father to his six children, and a devoted husband to his wife Carolyn and a loyal friend to many. Clarence was born June 14, 1938 in Cuba, IL to Telitha R. (Williams) Clark and Clarence E. Clark. He graduated from Manual High School in Peoria IL. He married Carolyn M. Totten on December 28, 1984 at the First Christian Church in Galesburg. Clarence retired from the United States Postal Service in Galesburg after many years of dedicated service. Clarence enjoyed camping and model railroading. Clarence was preceded in death by his parents, Telitha and Clarence, his loving wife Carolyn, and his brother Larry L. Clark of Peoria. Clarence is survived by all six children. Janlyn Vargas- Blin and her husband Rick of Virginia Beach, VA; Michael Clark and his wife Amy of Chillicothe, IL; Joanna Sherfinski and Rand of Hartland, WI; Lee Totten and his wife Beth of Chesapeake, VA; Thomas Clark and his wife Julie of Ashtabula, OH; and Alice Caslin of Chestnut, IL. He is also survived by his sister and brother- in- law Carolyn and Maurie Hines of Linn Creek, MO.; his sister- in- law Teresa Clark of Peoria, IL; his brother- in- law Ted Sodt of Stockton, IL. Clarence has 18 grandchildren and 6 great-grandchildren. The family would like to thank Rosewood Care Center in Galesburg, IL; Heritage Health of Chillicothe, IL; and Transitions Hospice for the loving care of Clarence and the many kindnesses shown to him. Memorial contributions may be made to the Parkinson’s Foundation. Graveside memorial services for both Clarence and Carolyn will be held at 11:00 A.M. on Saturday, May 4, 2019 at the Knoxville Cemetery in Knoxville, Illinois. A Celebration of Life will begin at 12:00 P.M. on Saturday, May 4, 2019 at the Knoxville United Methodist Church in Knoxville. To send flowers or a memorial gift to the family of Clarence A. Clark please visit our Sympathy Store.
To send flowers to the family in memory of Clarence A. Clark, please visit our flower store.