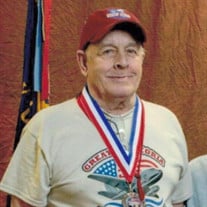 Charles Basham, 81, of Knoxville, died on Friday, July 24, 2020, 4:15 A.M. at the Knox County Nursing Home, Knoxville. Chuck was born July 10, 1939, in Galesburg. He was the son of Andrell and Geneva (Magee) Basham. He married Betty Campbell on September 27, 1959. He later married, Cecylia Holmes on May 16, 1988 in Bettendorf, Iowa. Chuck is survived by his children, Todd (Ellen) Basham of Vacaville, CA, Mark (Teresa) Basham of Knoxville and Kevin Basham of East Peoria; five grandchildren, Tim Basham, Virginia Basham, Cody (Danielle) Basham, Justin Basham, Tori Basham; step-granddaughter, Kaela Rickard; two greatgrandchildren, Cheyenne Basham and Owen Basham; and several nieces and nephews. He was preceded in death by his wife of 28 years, Cecylia; his parents; daughter, Kimberly; and siblings Don (Ruth) Basham, Doris (Bill) Carl, Bob (Lana) Basham. Chuck graduated from Galesburg High School. He was a veteran of the Army National Guard, where he served for 28 years. Chuck was an auto-mechanic at Tate’s for numerous years. After Tate’s closing, Chuck worked at Bolin’s Towing as a tow truck driver. Chuck was a member of Harvest Baptist Church, Galesburg. He loved to sit and have coffee with his friends. Never one to be shy, Chuck was a social butterfly and loved the comradery and ribbing between his friends and himself. He loved to watch Western’s and listen to country music. Most of all, Chuck loved to spend time with his family. Cremation rites have been accorded. A private family committal of cremated remains will be held at the Knoxville Cemetery, Knoxville, Illinois. Arrangements have been entrusted with Hurd-Hendricks Funeral Homes and Crematory, Knoxville. Memorials may be made to Wounded Warriors or the American Cancer Society. On-line condolences or expressions of sympathy may be made through www.hurd-hendricksfuneralhome.com.

Charles Basham, 81, of Knoxville, died on Friday, July 24, 2020, 4:15 A.M. at the Knox County Nursing Home, Knoxville. Chuck was born July 10, 1939, in Galesburg. He was the son of Andrell and Geneva (Magee) Basham. He married Betty Campbell... View Obituary & Service Information

The family of Charles Basham created this Life Tributes page to make it easy to share your memories.

Send flowers to the Basham family.