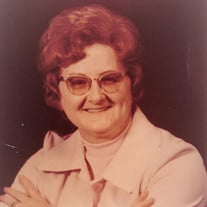 Bonnie Jean Laswell, age 90, of Galesburg, Illinois died at 8:18 A.M. on Monday, July 20, 2020 at Heartland Health Care Center in Galesburg, Illinois. She was bon on September 3, 1929 at Greenbush, Illinois, the daughter of Olin and Mary Day... View Obituary & Service Information

The family of Bonnie Jean Laswell created this Life Tributes page to make it easy to share your memories.

Send flowers to the Laswell family.