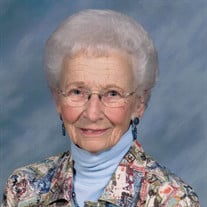 Betty June Broadfield Riggs, 97, of Knoxville, passed away on Thursday, July 29, 2021, at the Knox County Nursing Home, Knoxville. Betty was born on July 8, 1924 on the Steck farm near Douglas, Illinois. She was the daughter of Ralph and Ila (Young) Steck. Betty was raised and educated at Uniontown Grade School and graduated from Yates City High School in 1942. She married Dale Broadfield in 1944. She later married Alfred L. Riggs in 1960. Betty was preceded in death by her parents, husband Alfred, step-son Tom (Brenda) Riggs and one step grandson, Chris Clark. She is survived by her one daughter, Jean Ann (Broadfield) Ashton and (Stew Fuller), one granddaughter Stacy (Bill) Lotz and one great-granddaughter, Sophie Lotz; three step children, Donna (Kenneth) Peterson, Carrie Jo Doxsee and Helen Ann Stewart; seven step grandchildren, Eric Riggs, Lonnie, Korry, Kami and Jason Doxsee, and Brett and Mike Clark; nine step great grandchildren, and numerous cousins, nieces and nephews. She is also survived by her good friends Rose Chase and Karen Southard and families. Betty worked at Leonard’s Jewelers. Later, she moved to Tucson, AZ where she worked at Sears & Roebuck in the credit department before returning to Galesburg. She then worked at Burlington Truck Lines and retired from Maytag after 32 years and then from Southard’s Enterprises 10 years later. She was a member of the First United Methodist Church, as well as a volunteer and Board Member of the Knox County Humane Society and member of the Galesburg Women’s Moose Lodge. Betty will be long remembered for her sense of style, her and Alfred’s dancing, her love of John Wayne, her strong will, her love of animals, her generosity and love of her family. The family wishes to thank everyone at the Knox County Nursing Home and Compassus Hospice for their kind and compassionate care. Cremation rites have been accorded. A memorial service will be held 11:00 AM, Saturday, August 7, 2021 at Hurd-Hendricks Funeral Homes and Crematory, Knoxville. A private family burial will be held at the Yates City Cemetery, at a later date. Hurd-Hendricks Funeral Homes and Crematory, Knoxville have been entrusted with arrangements. In lieu of flowers, memorials may be made to the Knox County Humane Society. Expressions of sympathy may be left to the family at www.hurd-hendricksfuneralhome.com.

Betty June Broadfield Riggs, 97, of Knoxville, passed away on Thursday, July 29, 2021, at the Knox County Nursing Home, Knoxville. Betty was born on July 8, 1924 on the Steck farm near Douglas, Illinois. She was the daughter of Ralph and Ila... View Obituary & Service Information

The family of Betty June (Steck) Riggs created this Life Tributes page to make it easy to share your memories.

Betty June Broadfield Riggs, 97, of Knoxville, passed away on...

Send flowers to the Riggs family.