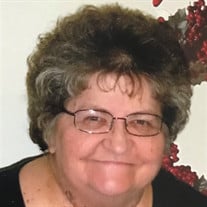 Betty J. Quinn, 78, of Knoxville, died on Monday, September 21, 2020, 4:54 AM, at OSF St. Mary Medical Center, Galesburg. Betty was born on May 15, 1942 in Moline, Illinois. She was the daughter of Harold and Mildred (Walker) Campbell. She married Charles Basham on September 19, 1959 in Galesburg, Illinois. Betty later married Raymond Quinn on July 14, 1988 in Cullman, Alabama, he preceded her in death on September 1, 2009. She is survived by her children, Todd (Ellen) Basham of Vacaville, CA, Mark (Teresa) Basham of Knoxville, Kevin Basham of East Peoria; stepchildren, Raymond (Dawn) Quinn of Galesburg, Debbie Nash of Wataga, David (Wyomia) Quinn of Hansville, AL, Vickie (Bob) Palmer of Galesburg; two sisters, Arlene (Len) Rashky of Florida, and Delores Coziahr of East Peoria; five grandchildren; two great-grandchildren; six step-grandchildren; and five step-great-grandchildren. Betty was preceded in death by her parents; husband, Raymond; and daughter, Kimberly Sue. Betty attended Galesburg Schools. She worked as a waitress at the Holiday Inn and the former Grants in Galesburg. She then went on to work for R&W Harmison and LaidLay Bus Service. She then went on to work at Protexall and Gross Manufacturing. Betty was a member of the First Christian Church in Knoxville. She loved to bowl, was a member of the Jaycees, she also sold AVON. Cremation rites have been accorded. A private family scattering of cremated remains will be held on a later date at East Linwood Cemetery. Arrangements have been entrusted with Hurd-Hendricks Funeral Homes and Crematory, Knoxville. Online condolences may be left to the family at www.hurd-hendricksfuneralhome.com.

The family of Betty J. Quinn created this Life Tributes page to make it easy to share your memories.

Send flowers to the Quinn family.