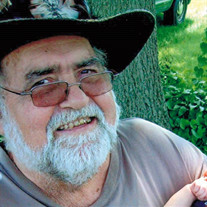 Bert W. Kelso, age 77, of Galesburg, Illinois, died at 9:54 P.M. on Tuesday, August 20, 2019 at his home. He was born on November 5, 1941 in Dahinda, Illinois, the son of Wilbert and Naomi (Kasparie) Kelso. On April 15, 1960, he married Brenda J. Blackwell in Dahinda. She preceded him in death on May 2, 2016. Left to cherish his memory are his children: Connie Godfrey of Galesburg, and Russell Kelso of Galesburg; six grandchildren; many great grandchildren; and many great-great grandchildren. He is also survived by his brother, Henry “Hank” (Phyllis) Kelso of East Galesburg, Illinois. He was preceded in death by his parents; one daughter, Sereta Jefferson; and three brothers, Lester, Glen and Frances. Bert was employed by Gates Rubber Company in Galesburg for thirty years, retiring in 2005 as a Pressman. He enjoyed attending yard sales, antiquing, and was a collector of everything. Cremation rites will be accorded. A celebration of life will be held at a later date. Memorial Contributions may be made to the family in care of Hurd-Hendricks Funeral Homes, 120 South Public Square, Knoxville, Illinois 61448. Hurd-Hendricks Funeral Home & Crematory in Knoxville, Illinois is assisting the family with their wishes.

The family of Bert W. Kelso created this Life Tributes page to make it easy to share your memories.

Send flowers to the Kelso family.