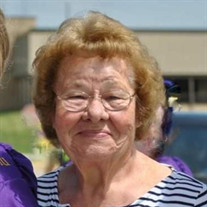 Barbara Jane Woods, age 78, formerly of Gilson, Illinois, died at 6:25 P.M. on Tuesday, May 5, 2020 at her daughter’s home in rural Altona, Illinois, surrounded by her family. She was born on September 8, 1941 in Huntsville Township in Schuyler County, Illinois, the daughter of Kenneth and Wilma (Gerdes) McDonald; they preceded her in death. She married L. Micheal Woods on May 25, 1963 in Huntsville, Illinois. She is survived by a son: Scott (and Kelly) Woods of Monmouth, Illinois; two daughters: Beth (and Richard) DeSchepper of Altona, Illinois, and Jill Ferry of Victoria, Illinois; three sisters: Shirley Smith, Mary (and James) Ippensen, and Janet Ludwig all of Augusta, Illinois; seven grandchildren: Taylor and Tanner Woods, Sarah (and Jerryd) Ehrnthaller, Emily and Andrew DeSchepper, Megan and Matt Ferry; one great-granddaughter: Chloe Ehrnthaller and one-great granddaughter on the way; as well as many nieces, nephews, and cousins. She was reared and educated in the Augusta School District, graduating in 1959. She then attended and graduated from Gem City Business College in 1961. Barbara lived most of her life in Knox County, Illinois. She worked for Galesburg Construction as a bookkeeper when first moving to Galesburg, Illinois, and later worked for District #202 as a cook for thirty-two years, retiring in May of 2006. She also worked for OSF Saint Mary Medical Center in the Dietary Department from 1990 to 2009. Barbara was a member of the Sorosis Club of Union. She was involved in PTA, school activities, and served as a room mother. She loved watching her grandchildren in all their sporting events and other activities. Visitation will be from 3:00 P.M. to 7:00 P.M. on Friday, May 8, 2020 at the Hurd-Hendricks Funeral Homes & Crematory in Knoxville, Illinois. Private services will be held on Saturday, May 9, 2020. Interment will be at Mound Cemetery in Timewell, Illinois. Memorial contributions may be made to the Knox County 4-H Foundation.

Barbara Jane Woods, age 78, formerly of Gilson, Illinois, died at 6:25 P.M. on Tuesday, May 5, 2020 at her daughter&#8217;s home in rural Altona, Illinois, surrounded by her family. She was born on September 8, 1941 in Huntsville Township in... View Obituary & Service Information

The family of Barbara Jane Woods created this Life Tributes page to make it easy to share your memories.

Send flowers to the Woods family.