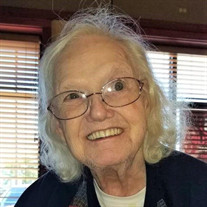 Barbara J. Johnson, age 81, of Galesburg, Illinois, died at 6:27 A.M. on Wednesday, April 8, 2020 at her home in Galesburg. She was born on January 31, 1939 in Aledo, Illinois, the daughter of Fred and Dorothy (Munson) Eastman, Sr. She was reared and educated in the Monmouth area, making many wonderful memories and lifelong friendships. Barbara married Walter C. Vaughn and together they had three children. He preceded her in death. She later married Joseph S. Johnson on June 15, 1973 in Galesburg; Joseph preceded her in death on June 18, 2013. Left to cherish Barbara’s memory are two children: John W. Vaughn of Seneca, Illinois, Angela Vaughn-Jones of Arkansas; two grandchildren: Melissa Oeth of Galesburg, Jennifer (and Jeff) Vaughn of Knoxville, Illinois; four great-grandchildren: Shane Corbin of Galesburg, Jayson C. Corbin of Knoxville, Amos J. Vaughn of Knoxville, and Jaycie Oeth of Galesburg. She was preceded in death by her parents; husbands; one daughter, Glenda Vaughn-Oeth; two brothers; and one sister. Barbara loved listening to country music and was a member of the Country Music Association. She enjoyed many past times, including bowling, quilting, and many different kinds of fabric crafting. More than anything else, Barbara loved spending quality time with her family, especially her great-grandchildren. Her great-grandchildren brought her immense joy and were the light of her life. She was a beloved mother, grandmother, great-grandmother, and friend who will be deeply missed forever. Cremation rites will be accorded. A private graveside service will be held on Monday, April 13, 2020 at the Knoxville Cemetery in Knoxville. Memorial contributions may be made to the American Cancer Society.

The family of Barbara J. Johnson created this Life Tributes page to make it easy to share your memories.